If you’ve gotten this far, you’re obviously more interested in your service provider than the average person, and we appreciate that.

This page is for the part of our ZUF community that is curious about how a shop like this happens, and by it’s nature (and singular perspective being what it is) it is a subjective overview of how Zuffenhaus occurred.

Bob and Keith first met in Fort Worth, Texas; Bob having been a longtime friend of the owner of an independent Porsche shop where Keith had been recruited to work after college, primarily as a result of his involvement with the online PorscheFans mailing list (what would later become PorscheList and ultimately RennList.com)

As a lifelong Porsche enthusiast, Bob already had decades of involvement in Motorsport, starting with a childhood visit to the brand-new Laguna Seca track in 1958, and as an adult he could be found on the weekends on the hillside above Turn 5 at Road Atlanta. Bob had later helped a friend build & campaign a SCCA DP 1967 911 SWB; had been part of a podium-finishing effort with a LWB Targa at the SCCA Runoffs in the early ‘80s; and had been involved in SSA 924, DP 924, Audi Sport Quattro, and IMSA Firehawk 944 efforts.  In 1983/84 he was involved with Bayside Motorsports’ Holbert-built GTU 924 Carrera GTR which competed alongside the Bayside 934 and the first team-delivered 962 racecars.

Keith returned to the Carolinas from Texas to accept a position with his alma mater and resume creating & exhibiting sculpture.  Not long thereafter, he was offered a position with Bob’s newly-formed Istook-Aines Motorsport Group (again Texas-based), where he cut his teeth in professional racing. Bob had at that point retired from a 28-year information technology and consulting career and formed IAMG with friend and racing associate Don Istook, to compete in the Motorola Cup (becoming Grand AM) and SpeedVision World Challenge series with two then brand–new Audi S4’s.

Keith and Aaron had met in art school in ’98 (and were most likely the only two on campus that drove & maintained Porsches.) In 2000, Aaron – who’d recently earned his BFA in Photography and was then working with Keith at the university – accompanied him to an East Coast race to help crew for Istook-Aines – and shortly thereafter moved to Fort Worth himself, quickly becoming the crew chief.  As part of IAMG, he extended his automotive experience as a technician between races, building and repairing Porsches of all models for club racing. Keith, having local responsibilities, continued to fly in to the races from Charlotte as car chief of the second car.  Those efforts ultimately led to a third place finish in the Grand Am Cup GS season results for 2003.

During 2002, Keith left his position with the University and joined a fledgling Porsche-service business, then in its second year, that would later become part of the Zuffenhaus companies.  Aaron returned to the Carolinas at the close of the 2004 racing season to join that effort.  Within a year, their similar design and motorsport backgrounds had informed the concept of the Zuffenhaus brand.  By the end of 2005, Bob himself had joined ranks and we all formed Zuffenhaus here in the Carolinas, our focus being the preservation and enhancement of 911s.

By 2006 we’d built several RSR-based competition 911s for both road racing and rally purposes (including Targa Newfoundland) and some custom builds for export overseas. Issues with ‘special’ and ‘historical’ parts availability had already led us to seriously consider short-run manufacturing to provide what we needed to complete our clients projects.   So, by the end of 2006 we were in the early stages of forming our product company, Zuffenhaus Products.

In 2007 Zuffenhaus Products rolled out 3 historic steering wheel reproductions: our take on the proper flat Prototipo wheel, the 911R wheel, and the 380mm RS/RSR steering wheel; 3 corresponding hubs; 2 historical horn buttons; and we were knee-deep in the creation of our game-changing 17inch interpretation of the Fuchs wheel, famously used on the Singer Vehicle Design’s 911/964 restorations.
Since that time, the catalogue has grown, always with more prototype parts in development.

In 2009, we were able to make our products available to the European market; since then Zuffenhaus Products has been represented in Essen, Germany at the 2009, ‘10, and ‘11 Techno-Classica events.

Zuffenhaus Eurowerks (our service & build shop) now enjoys the opportunity to create something new – and old – on a regular basis. Despite our rogue approach to building 911s, we do our best to maintain a historical and detail-oriented aesthetic and approach these builds channeling the spirit of Ferdinand & Butzi.
( – and in a sense, we’re still using our art degrees)

During the formation of Zuffenhaus, Bob was also getting involved with RGruppe.  Sharing an an affinity for early hot-rod 911s; Keith and Aaron became members in 2006.  (Since then, Aaron has served as RGruppe Southeast Chaptermeister, working to bring the early 911 hot rod message to our region.)

We’ve enjoyed attending major west coast Porsche events since then – including Ventura, Rennsport(s), Monterey Historics, RGruppe Treffen(s), the Lit Show and a few meets at EASY.  Aaron had the opportunity in 2008 to drive the Tour de la Ditch to Treffen and back in his ‘73 3.2L 914/6, and Keith did the same in a ’72 911 for RRV and Treffen IV in 2015.

On the East Coast we’ve had a presence at Rennsport Reunion III at Daytona, with our Race Transporter parked in NASCAR 2 as a de-facto RGruppe headquarters and observation deck; annual East Coast Bergrennens; and participated in mountain drives and the Rally in the Valley events.

In Texas, Bob is instrumental in organizing activities, including the annual Hill Country Rally, as well as making his annual drive to Treffen and other East and West Coast events in his Tangerine ’69 911E.

All of this – the growth of our business and our role in the new wave of Porsche culture – is a result of your patronage. And since you’ve given us yours; let us give you ours. Although we cannot give away our means of making a living, we can certainly share the Haus in which we do it.

Zuffenhaus is also an event space, so if you’re looking for a suitable place to host your Porsche-oriented event (concours, gathering, themed wedding; etc.) we want to donate our space for your event.

Let us know when we can be your host. 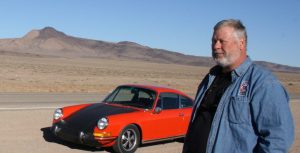