Normally I’m a planner. I map out my trip in excel, keep a running tabulation of expenses, mileage, etc. Accordingly, I’d made all the appropriate reservations and budgeting before I left.
However, on Sunday night it had occurred to me that I’d never been to the Grand Canyon. So Tuesday morning I woke early in Kingsman AZ and decided to take the opportunity. 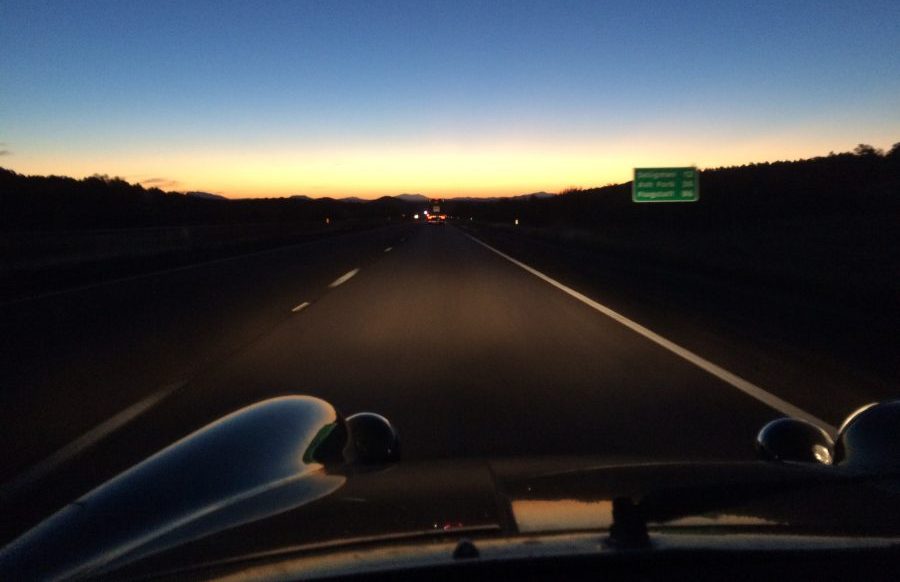 I made the South Rim by 9 am, and it was pretty amazing. 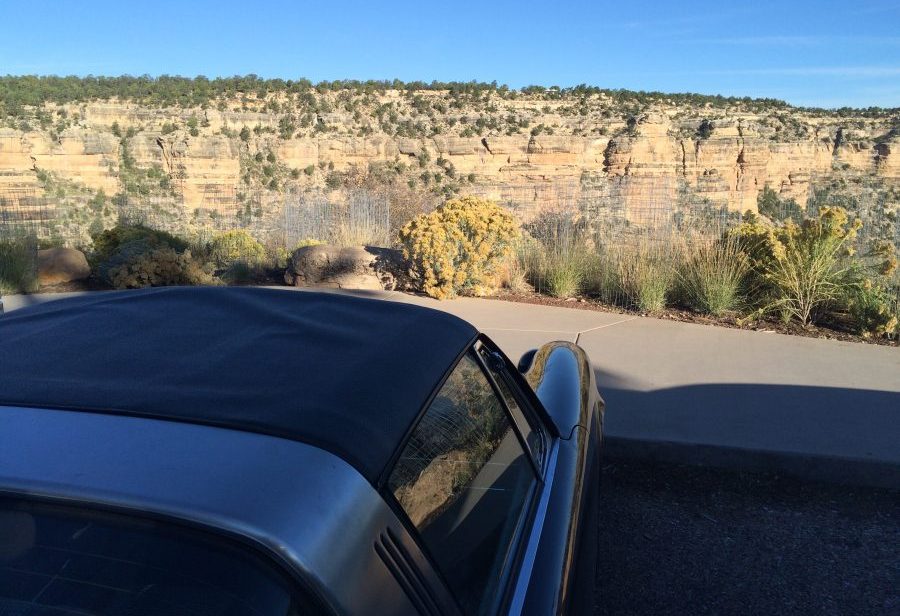 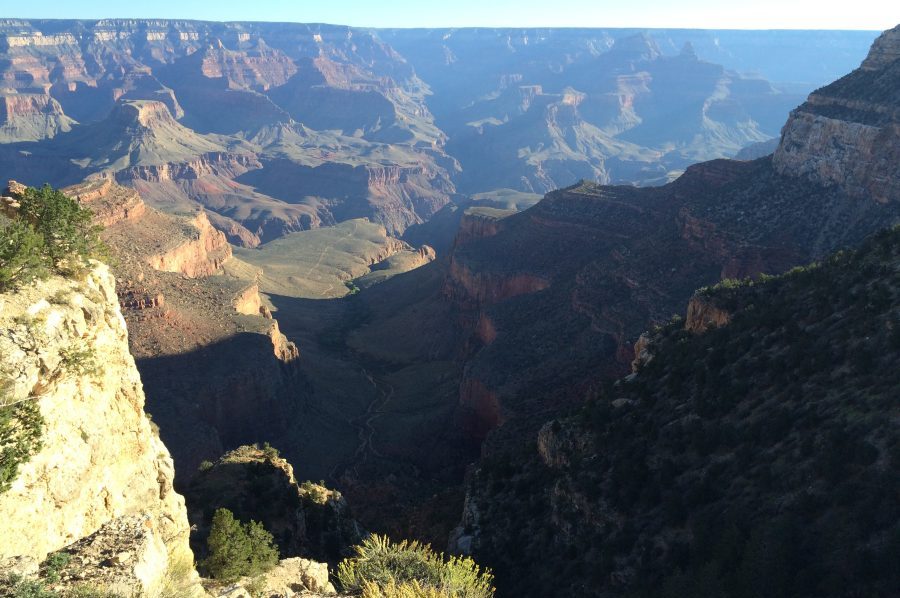 After the initial impact of the Canyon passed and my travel-management mind regained control (I didn’t actually beat Chevy Chase’s record for shortest visit to a national treasure, but it was close), I decided to also drop in to see Kurt Donohoe at PartsKlassik outside of Flagstaff, AZ, on my way back to I40; a decision which surprised me with an unexpectedly pleasant drive over 180 – with a lot of elevation. 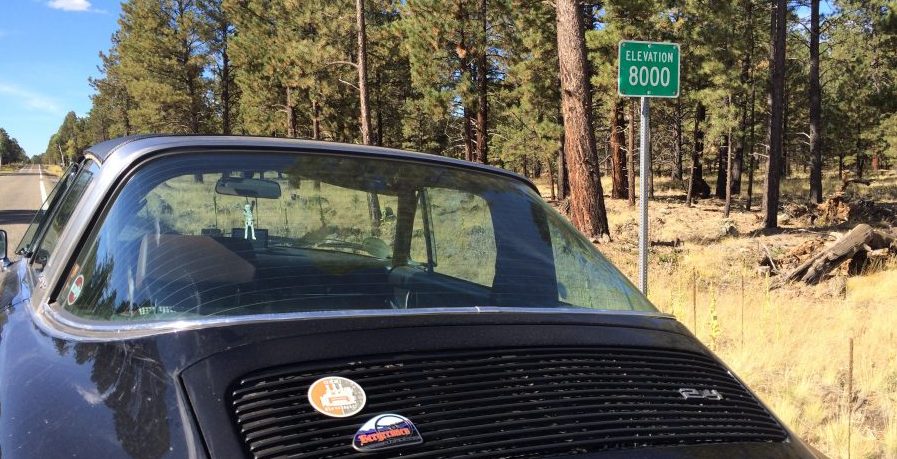 (I was subsequently informed via social media that Tom & Hal saw 10K+ elevation on their Vail Pass route that same day, but I’m still pretty pleased with my unexpected 8046ft.)

The surprise stop-over at PartsKlassik was certainly rewarding: with Kurt having several new things in development for the early 911s (as always), and the breath-taking setting; his shop being located in a small valley at the foot of a mountain. I’ll be certain to make his place a regular stop-over point in future travel.

I left PartsKlassik through Flagstaff, back to I40 and as the day progressed, things became even more interesting: 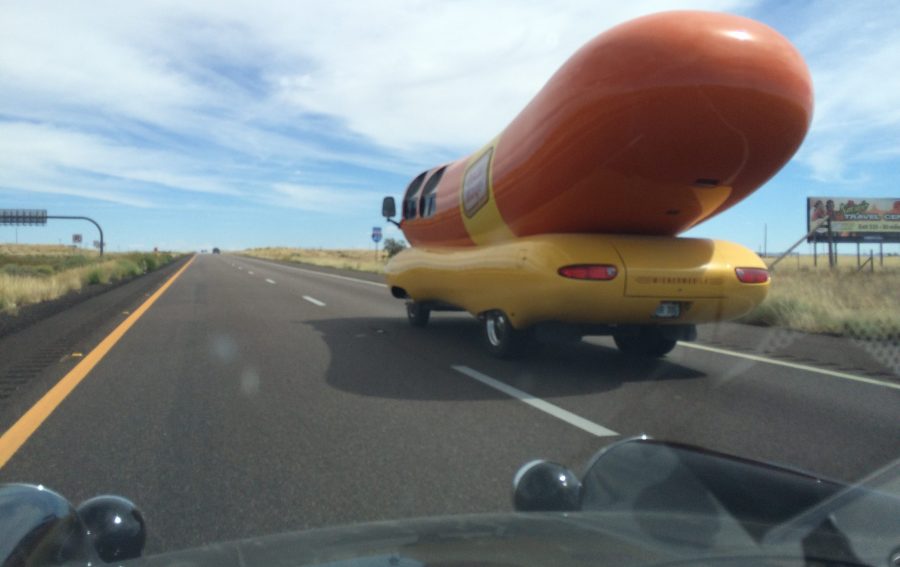 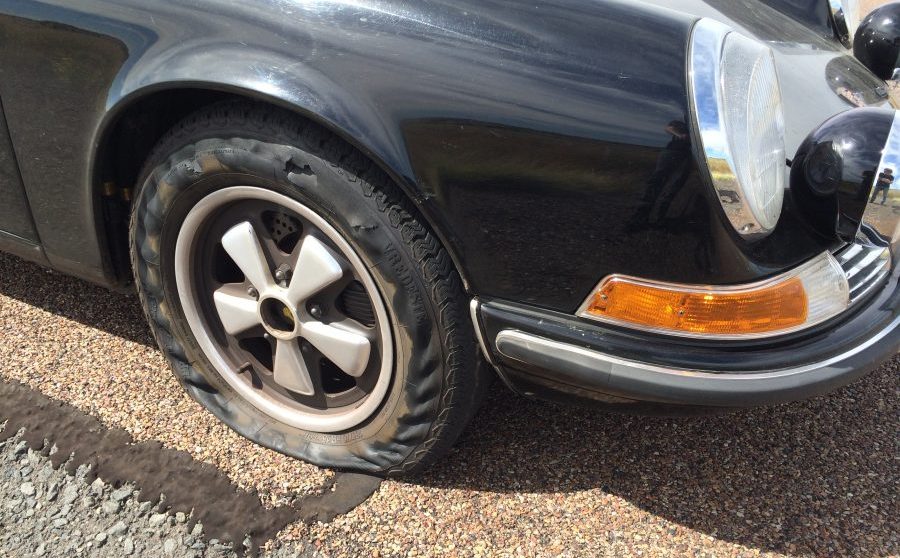 How often does one get to do a roadside repair nowadays? Better yet, how often do tires blow out the sidewall anymore? This tire blew as I was passing a car in the left lane (at exactly the speed limit, officer.) And to add insult to injury, the spare wouldn’t fit over the (really cool) RSR brake calipers (that we make!) that I run on the car. 😉

I had no choice but to unpack my folding chair and take a break on the side of I40 and wait for mobile tire service – which I did masterfully. 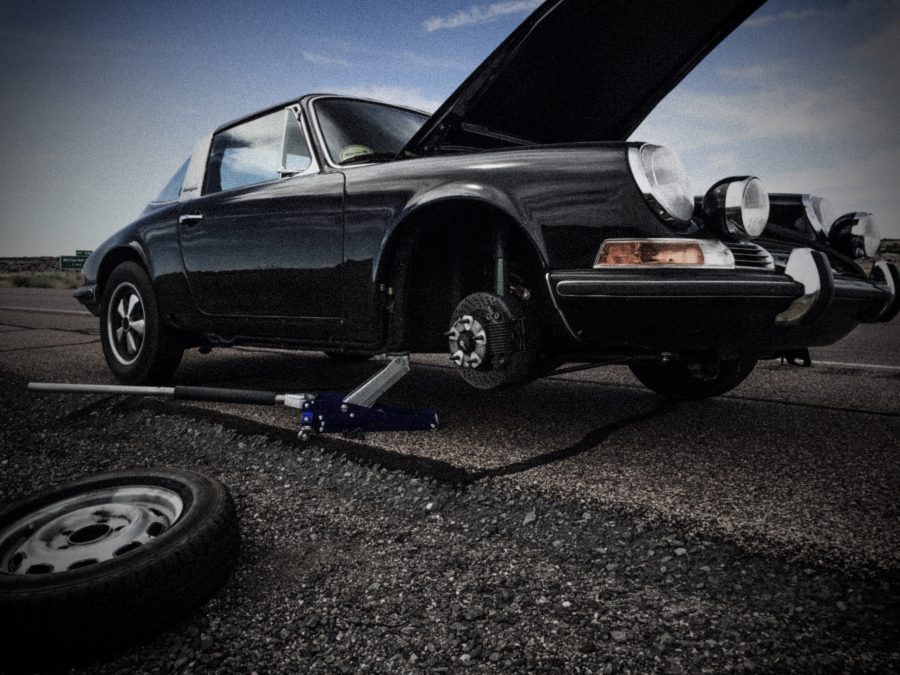 As fortune would have it, my tire happened to blow out ~7 miles from the location of a mobile truck tire service – and within no time at all, two large fellows were hard at it; beating and prying the tire off of the Fuchs wheel (which is original to the car) and replacing it with the one from my poorly chosen steel spare. Watching two strangers work on my stuff, I reminded myself that whatever scarring the Fuchs suffers is ultimately a consequence of my own inadequate preparation.

To be honest, the guys did a good job, slide hammers and truck tire levers notwithstanding, and to my surprise and relief the wheel was no worse for wear and I was back on the road within an hour, and in New Mexico shortly thereafter.

Chris (‘66 911R) caught up with me in Albuquerque Tuesday night on his way back to Tulsa, and crashed on the spare bed at my hotel. He’d driven up to San Francisco Monday morning, got caught in California traffic heading back down to I40, and had only just left California that day. (Although less miles, his driving days certainly were harder than mine, both coming and going.) He repaid the free hotel favor by offering me a couch at his place in Tulsa the next night, so I deviated from plan once again and we headed East the same way we arrived in California – as a two-car vintage 911 convoy. 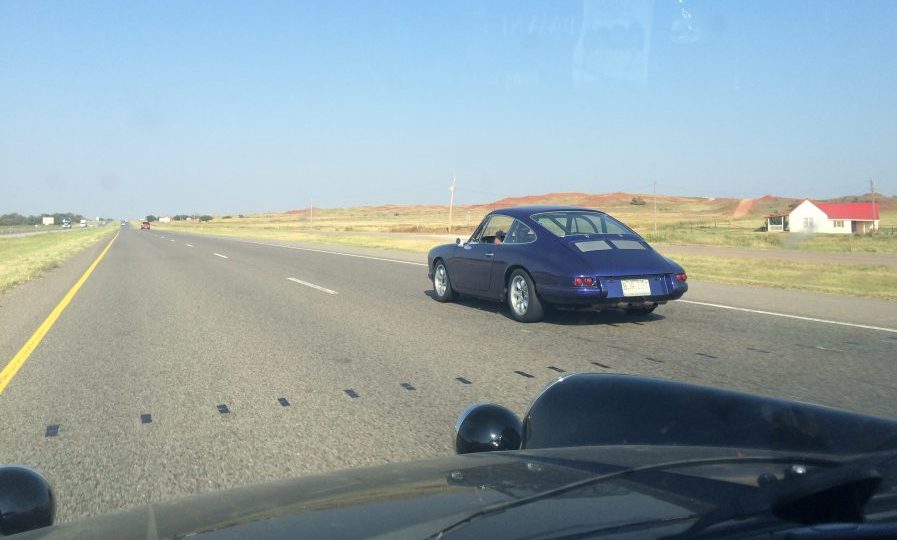 We made our way across New Mexico and into Texas on I40, stopping for fuel and lunch at a truck stop just before the border in Tucumcari, where to my amazement an attendant (who I’m pretty sure was German) noted my prototype spring plate bushings through the fender well and initiated a conversation about the failure rate of the factory rubber bushings! He’d apparently had recurring issues with previous 911s and 912s he’d owned, and was curious about the effectiveness of this ‘solution’. Small world.

Afterward, we made time for a short stopover at the historic Art-Deco 1936 Conoco Tower Station on Route 66 in Shamrock, Texas. As we veered off of I40 onto Route 66 at interstate speed, we both failed to successfully navigate around what is now formerly the longest and fastest (?) snake in northern Texas. Mindful of the previous day’s tire blowout, I took the opportunity to check over the car under the fantastic Deco awnings – which was likely the most automotive action that place has seen since it was a functioning service station. 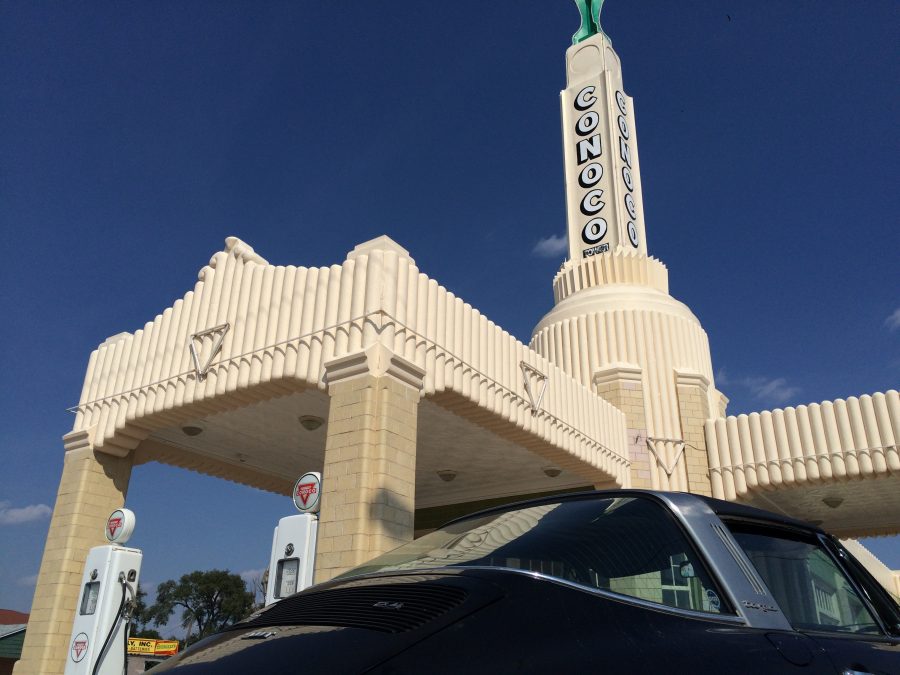 A few hours later in Oklahoma – as the sun was setting – we redeemed ourselves for the snake incident when we both (successfully this time) avoided what has to be described as a roughly 911-sized cargo bag – that suddenly appeared in front of us in the passing lane of the (walled) I44 Turnpike.

Unfazed, we arrived in Tulsa later in the evening, in time for a beer & burger at a local pub, and after a few hours of rest I was back on the road at 4am, headed for Knoxville.

After almost 2 weeks on the road, my travel to Knoxville was comparatively uneventful, albeit increasingly long. It seems as you get closer to home, every mile takes longer than the previous one, does it not? 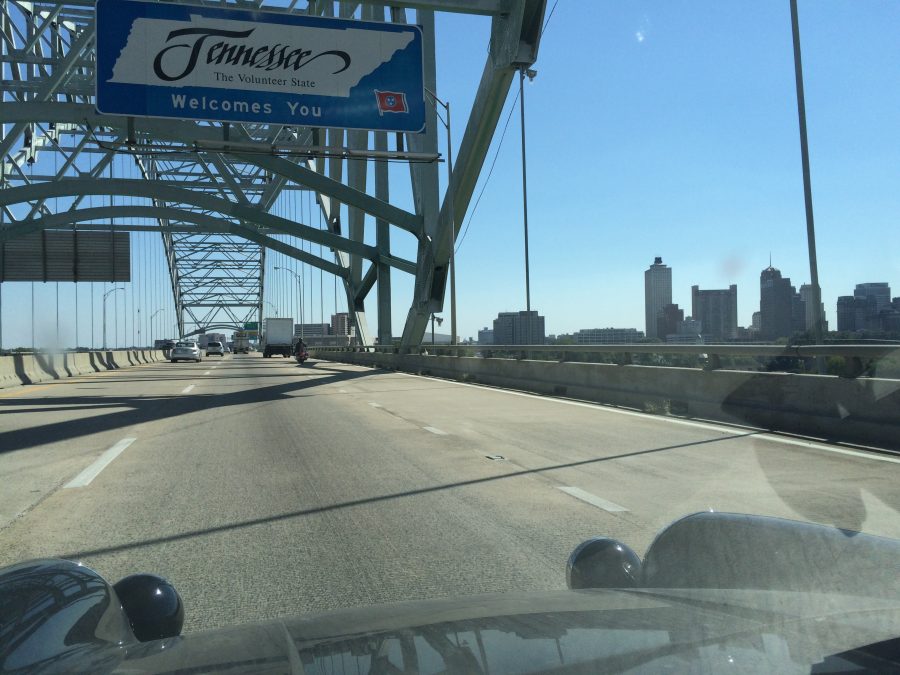 With the terrain becoming more and more familiar I crossed the Mississippi into Memphis; officially back on my preferred side of the River. 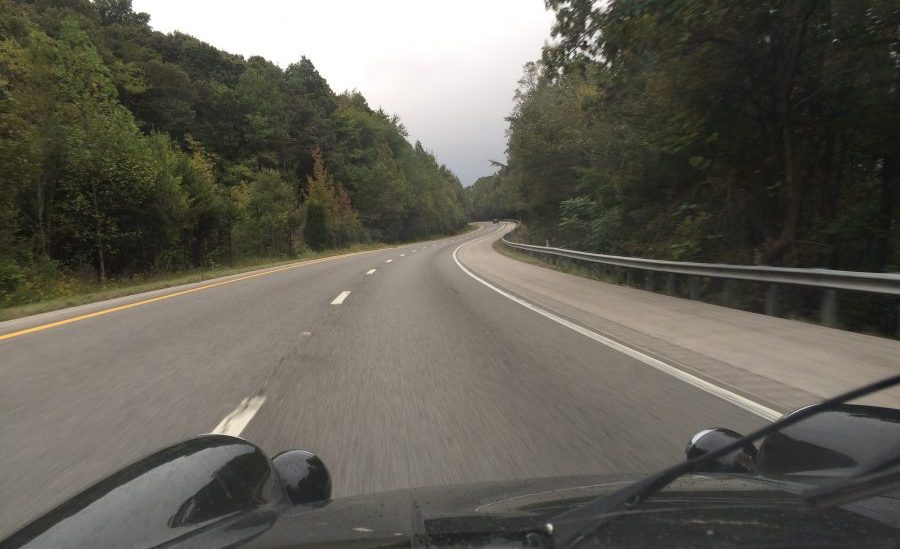 So far on the trip I’d not seen a drop of rain; this held true until I was just east of Nashville. A few scattered but increasing showers later, I reached my hotel in Knoxville around 7:30pm. I’d planned for a relaxing evening followed by a playful last day on NC mountain roads as I wound my way back to Charlotte, but the extraordinary weather and flooding that had begun while I was away was predicted to worsen, so after a quick dinner and a shower I checked back out of the hotel and headed home that evening. (I can recommend the Hampton Inn Knoxville East, even though I only stayed there for an hour!) 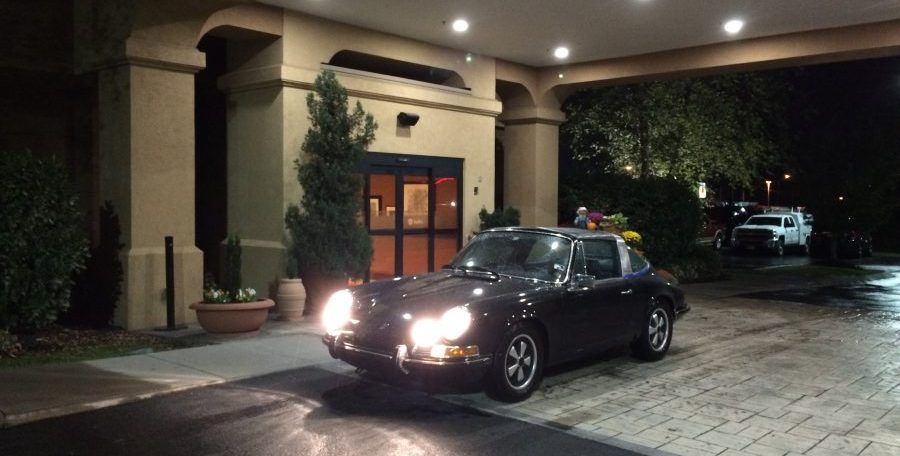 I drove back to Charlotte from Knoxville in continuous rain and made it to the shop a little after 1am on the morning of Friday, October 2nd.

The entire trip had taken just over 13 days, and the car and I had covered over 6300 miles crossing the US – certainly not setting any travel records, but a good jaunt for a pair of 43 year-olds. Later in the morning I unpacked the car, washed off the majority of road debris and bugs from the front and sides, and parked it in the shop.

As I mentioned earlier, I consider myself fortunate to have had the opportunity to attend 3 of the Rennsport Reunions, but doubly so to have had the opportunity and the means to travel to this event in an early 911. In my 15 years of PCA membership, this has been the most immersive Porsche experience I’ve had, and even as I’m in my office typing this, I’m still at Rennsport. 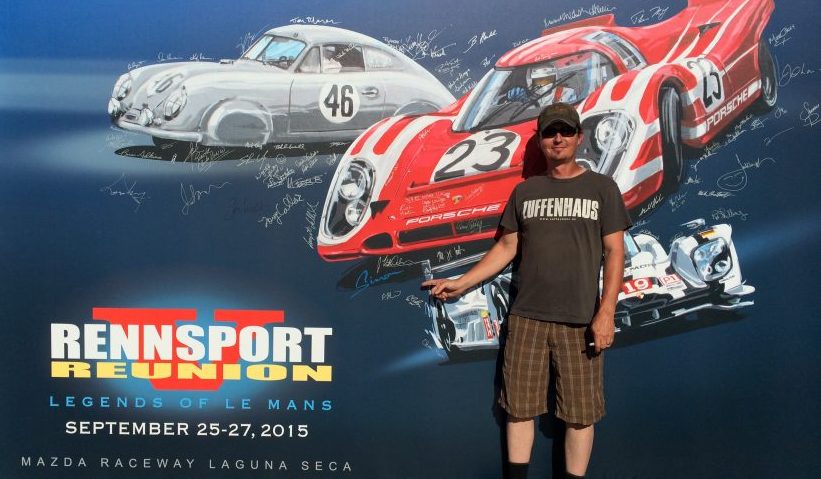 I hope this brief retelling has been entertaining and that everyone has the opportunity and the means to experience a similar event in this way at some point in their lives; I’m certainly going to try to do it again when the opportunity arises.